Basilicata is an extraordinary land, capable of fascinating ancient Greeks and modern man; it has had a unique destiny: opening onto two seas, crossed by essential natural communication routes and witness to all major Mediterranean civilisations, until recent times it suffered isolation, poverty and emigration.

Nature has blessed it with splendid and always surprisingly different settings, from the severe tyrrhenian coasts to the gentler Ionian shores, from the Apennine mountains covered with forests to the lunar landscapes of hills impressed with erosion furrows; yet, nature has also inflicted harsh blows, with recurrent earthquakes that have repeatedly devastated the appearance of the territory.

The roads of Basilicata have seen the passage of peaceful populations and violent mobs, the audacious Liky and refined Greeks, proud Samnites and astute Romans, as too the Barbarians, Byzantines, Normans, Angevins, Saracens and Albanians.

Traces remain in the archaeological sites of Metaponto and Siris, Grumentum, in the historic towns and the museums of Policoro, Matera and many more. 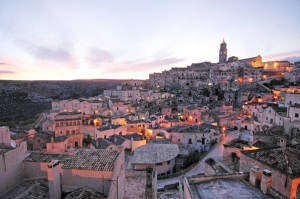 During this coming and going of peoples, the inhabitants of Basilicata ( or Lucania as the region was known in ancient times) have learnt to accept exiles and refugees ( Albanians found refuge here as early as the late Middle Ages) and at the same time to defend their freedom against whoever should threaten it.

With equal pride they have kept alive traditions based on ancient rites, although the love for their roots has not made them a closed people; the inhabitants of Basilicata, with their intellectuals and artists, have always learnt from every cultural stimulus, as it is shown by the paintings, architecture and abundance of crafts.

This creative spirit is also manifested in the traditional cuisine, which turns the humble ingredients of a rural world into masterpieces that delight the palate. Aglianico the famous Vulture wine, is the result of the interaction over the centuries of nature and man: on the one hand, the unusual qualities of the volcanic soil, on the other hand the cultural contributions made by Greeks and Romans, who perfected the cultivation of grapes , and the Albanians , who brought their wines .

The stubborn attachment to this sometimes generous, sometimes ungrateful land and the interest in the new without forgetting the past are visible in the capital, Potenza, and in the towns and villages obstinately reconstructed after the last earthquake in 1980, and in Matera – UNESCO’s town and 2019 European of Culture Capital – where projects for brand new districts are flanked by those for the recovery of the ancient Sassi, too in a sensible approach to the territory with the creation of numerous parks and nature reserves, the prized Pollino National Park in particular, or Maratea the most important town on the 30 kms. of the Gulf of Policastro, the part of Basilicata which stretches between Calabria and Campania. 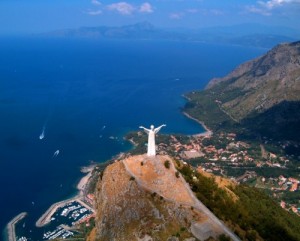 It is an extended community of clusters of medieval, pastel-painted villages, of which the oldest were built high up on the slopes of Monte San Biagio the Settlements were established on Monte San Biagio as far back as the 7th century, creating Upper Maratea that represented the entire city until the 11th century. The settlement was built here partly as a defence against the sea-borne marauders who roamed the waters at that time. The remains of a castle which defended Maratea are still evident today. Gradually, as times became more peaceful and access to the sea more important, the population moved towards the valley and created new settlements, the most important of which was lower Maratea, the present historical centre of the town. At the peak of Monte S. Biagio stands the statue of Christ the Redeemer, 22m high and with an arm span of 19m, erected in 1965 and made from Carrara marble by the sculptor Innocenti. There was a sea-port here even in Greek times, and gradually, as the area became less lawless, settlements were created nearer the coastline.

Villas and hotels have been built – mostly fairly tastefully – to cater to the tourism industry.

We use cookies to ensure that we give you the best experience on our website. If you continue to use this site we will assume that you are happy with it.OkRead more